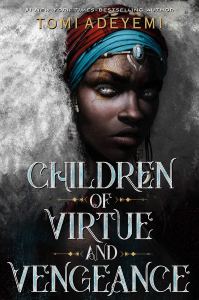 Children of Virtue and Vengeance

After battling the impossible, Zélie and Amari have finally succeeded in bringing magic back to the land of Orïsha. But the ritual was more powerful than they could’ve imagined, reigniting the powers of not only the maji, but of nobles with magic ancestry, too.

Now, Zélie struggles to unite the maji in an Orïsha where the enemy is just as powerful as they are. But when the monarchy and military unite to keep control of Orïsha, Zélie must fight to secure Amari’s right to the throne and protect the new maji from the monarchy’s wrath.

With civil war looming on the horizon, Zélie finds herself at a breaking point: she must discover a way to bring the kingdom together or watch as Orïsha tears itself apart.

I’m not looking forward to writing this review. I absolutely adored Children of Blood and Bone so I was obviously really excited for the sequel. However, this… kind of let me down. I’m hoping it’s just because it’s the middle book in a trilogy that happens so often, but I was left wanting so much more from this.

As usual, Adeyemi brings a rich, diverse cast of characters that are all so complex in their own ways and so interesting to learn about. I adore Amari and Zelie with all my heart and love that Adeyemi makes them both likeable and unlikable at the same time! I’m equally rooting for them and wondering why the hell they’re making such stupid decisions. But that’s the reality of humans, and I’m so glad that Adeyemi has made these two main characters as realistic as possible even though they come from a fantasy land.

As for the plot, it sort of went nowhere. I feel like except a few major things, we were still sort of in the same place at the end as we were at the beginning. I kept reading and expecting something big to happen. I mean, we waited more than two years for this right? I’m still going to read the final instalment of course but I think after this book I’m not going to hype it up too much, because then I’ll be left disappointed. There was so much potential for where this book could have gone after COBAB, but unfortunately I feel like it missed its mark.

However saying that, Tomi Adeyemi’s writing style is gorgeous. She has such a natural way with words and her characters and worldbuilding are addictive. I just wish the lack of plot didn’t bring this book down for me.