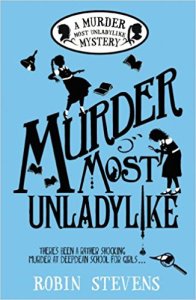 Deepdean School for Girls, 1934. When Daisy Wells and Hazel Wong set up their very own deadly secret detective agency, they struggle to find any truly exciting mysteries to investigate. (Unless you count the case of Lavinia’s missing tie. Which they don’t, really.)

But then Hazel discovers the Science Mistress, Miss Bell, lying dead in the Gym. She thinks it must all have been a terrible accident – but when she and Daisy return five minutes later, the body has disappeared. Now the girls know a murder must have taken place . . . and there’s more than one person at Deepdean with a motive.

Now Hazel and Daisy not only have a murder to solve: they have to prove a murder happened in the first place. Determined to get to the bottom of the crime before the killer strikes again (and before the police can get there first, naturally), Hazel and Daisy must hunt for evidence, spy on their suspects and use all the cunning, scheming and intuition they can muster. But will they succeed? And can their friendship stand the test?

Wow, it feels like ages ago when I read this book so it really shows me how much I need to catch up on my reviews!

But today I’m going to be talking about the first in the Wells & Wong series – Murder Most Unladylike. I’ve had this book (as well as the sequel) for so long now that it was only fair I eventually got around to it. I don’t know why I put it off for so long – I knew from its premise and the hype around it that it would be right up my street.

And right up my street it definitely was! I loved this book so much. It was fun and although the writing was simple it didn’t take away from my enjoyment! I loved Hazel as a protagonist and, although she got on my nerves at times, I grew to love Daisy too. I wasn’t expecting the ending/resolution at all so I thought Robin did a really good job of drawing out the suspense with the plot and finishing with an unexpected conclusion.

I also loved the 1930s setting of a girls’ boarding school! This was a solid opening novel to what I can only expect is to be a fantastic, thrilling series! I cannot wait to read all the next books! Also, special shoutout to my friend Amy at Golden Books Girl for encouraging me to begin this series and loving Hazel and Daisy for so long!

3 thoughts on “Review: Murder Most Unladylike by Robin Stevens”