Day 2 of Deptcon was probably my favourite of the two, only because I got a lot more goodies since I was first in line in the early morning. Also, I got to meet a lot more friends and authors on the Saturday too.

The final panel kicked off at 11am after the intense ARC grab – I swear it was worse than The Hunger Games! Anyways, in the first panel was C.L Taylor, N.D Gomes and Chloe Seager! I have an ARC of The Treatment by CL Taylor, and I’ve read Blackbird by ND Gomes from netgalley. I thought this panel was really informative as an aspiring author. I learned that CL Taylor uses a 3 or 4-act structure when writing her novels and tends to stay in a hotel for a weekend every now and again to really get the words out. When asked to give advice for aspiring authors like myself, here is what they came out with:

CL Taylor: Cut out the bits the reader skips and always be thinking what is it my main character wants? You want to fuel their journey but also give them a flaw.

ND Gomes: Create a writing routine and playlists etc can be helpful to get into the head of your main character.

Chloe Seager: Put it away for a long time before returning to it to redraft it (really helpful!) 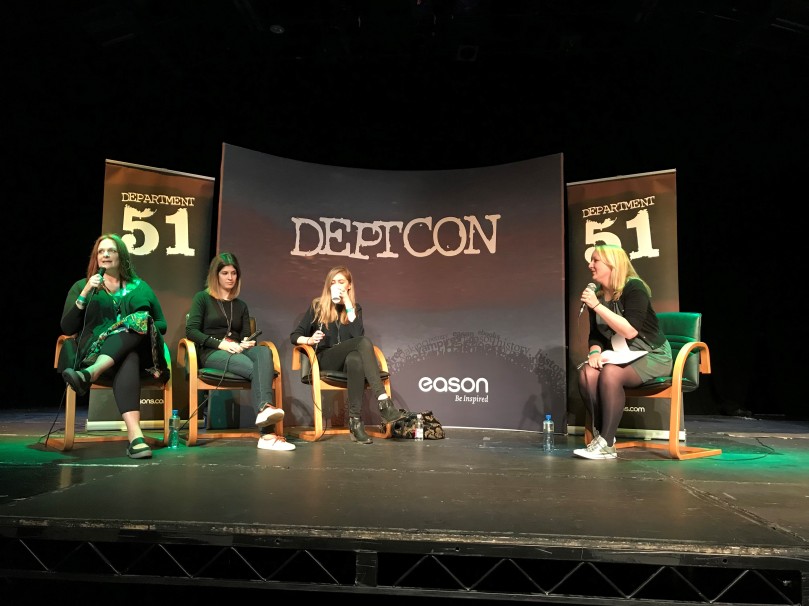 The second panel of the day kicked off at 12:30. This included Estelle Maskame, Sara Barnard (fave!!), Meg Grehan (also fave!!) and Sheena Wilkinson. I haven’t unfortunately read anything by Sheena or Estelle yet but I do plan to! Sheena Wilkinson sounded so wise and described writing/publishing as a rollercoaster! From what I’ve encountered so far, I can totally agree… 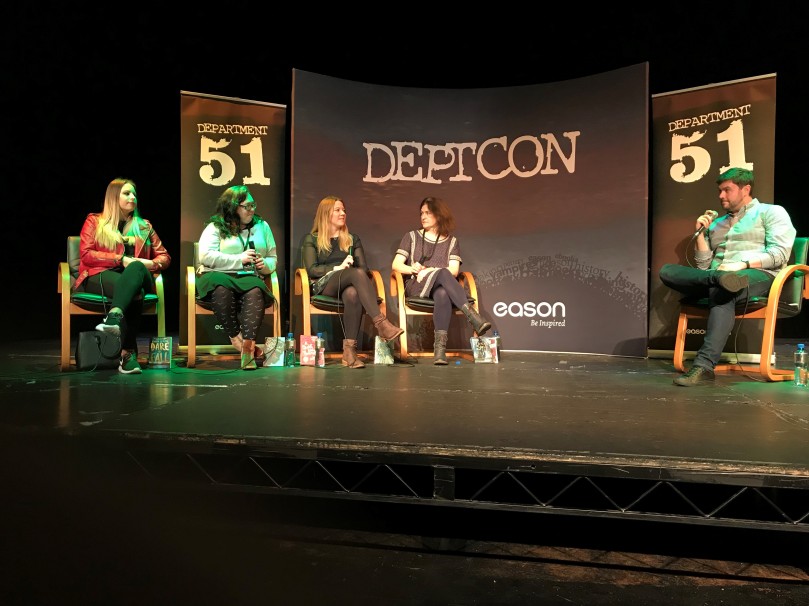 The next panel started at 2 and included Pooja Puri, Sally Nicholls and Lydia Ruffles. I have only read Things A Bright Girl Can Do (review here!!) and loved it. However on the panel, from the way Lydia Ruffles described A Taste of Blue Light, I practically ran to the bookshop before the signing because it sounds quite fab! (Note: My friend accidentally took it home with her so it won’t be in my haul photos). I really want to pick up Puji’s The Jungle soon too. I think I warmed up to Sally Nicholls almost immediately, especially when she said “can’t we have relationships not just about being gay, but relationships being about love?”. PREACH! Also, this was a really good panel for advice too…

Sally Nicholls: Make writing the most important thing in your life

Pooja Puri: Listen to the voice that tells you to keep going on a book or story you’re finding difficult

Lydia Ruffles: Read tons about how other people do it but then disregard what they say and do it your own way!

Also Deirdre Sullivan was yet again an amazing moderator! 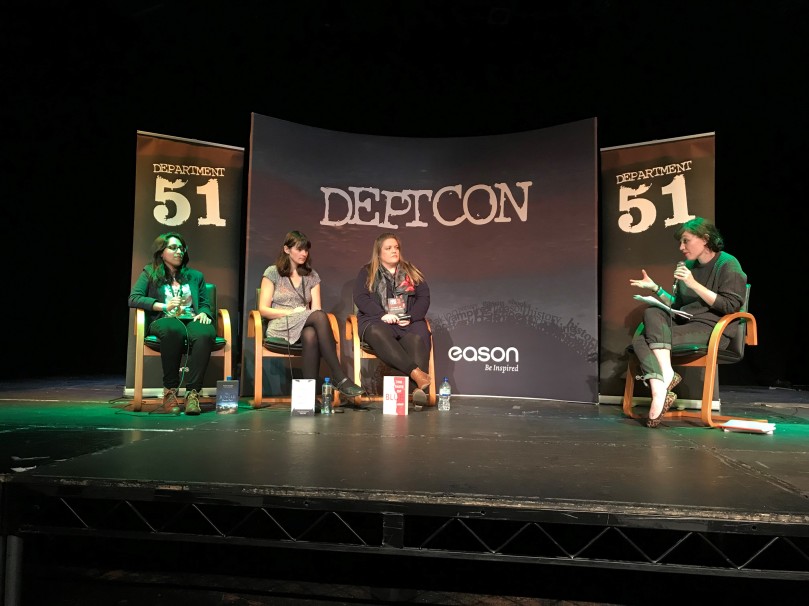 The 4th panel began at 3:30 with Hayley Barker, Emily Barr, Anna Day and Amy Alward. Hayley’s advice is to try and try and keep writing is what will will turn your ideas into books and Anna Day told us to grow a thick sin for the writing industry and don’t take criticism too personally. 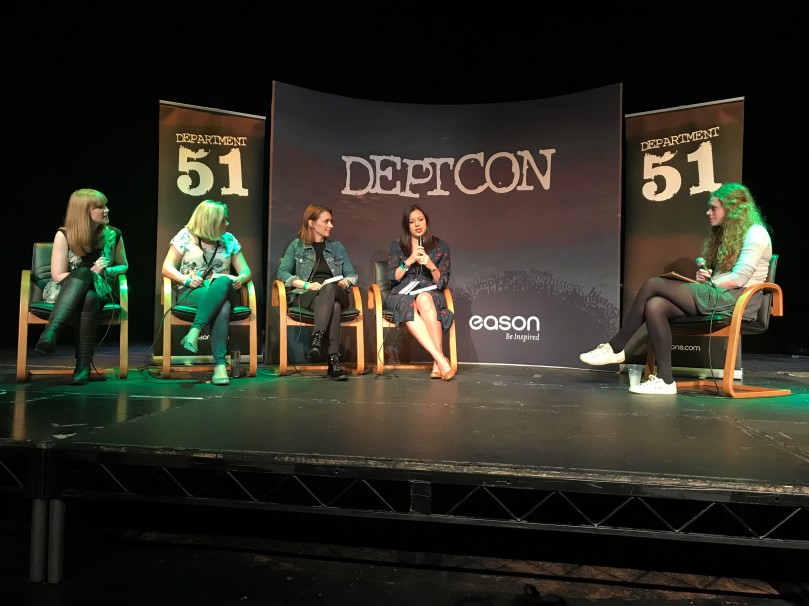 The second last panel of the day started at 5 and it was probably my favourite of the two days! I think I liked it especially because it had the theme of … wait for it… Secrets & Prosecco. On this panel was Melinda Salisbury, Dave Rudden, Moira Fowley-Doyle and Alice Broadway. This was chaired by Catherine Doyle who was an amazing moderator too, so hilarious! I had a book for everyone on this panel thankfully and I especially loved meeting Moira Fowley-Doyle, who took part in #LGBTQMonth back in July!

The final panel (cry!) kicked off at 7:30. On it was Orlagh Collins, Patrice Lawrence and Juno Dawson and my absolute fave Sarah Crossan!! I loved meeting all these authors and thankfully I had a book by each of them to get signed too. I won The Language of Thorns in the raffle but since I’m not a big fan of Bardugo’s books (I know, it makes me so upset) I struck up a bargain with Megan and she bought me Margot & Me in exchange for it! During this panel we also found out that Orlagh Collins has Jamie Dornan’s phone number from working in the film industry.

And finally, here is my haul of all the books I got!!

The samplers I got!

Then next, the books I bought (not including The Taste of Blue Light!)

Then, the two finished copies I received for free! 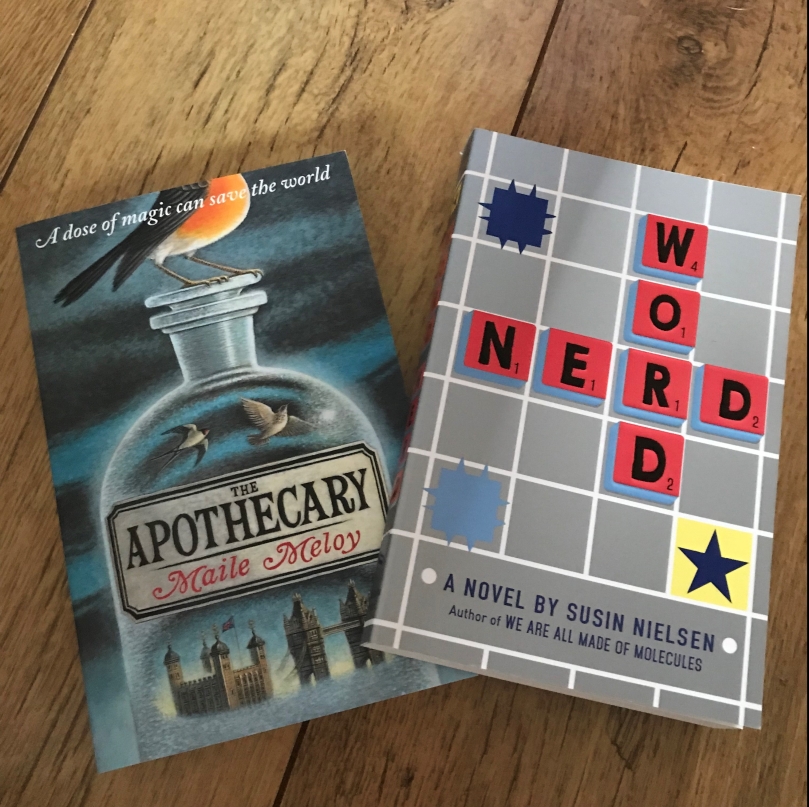 And then, the amazing amount of ARCS i got from the super Dept51 team!

Overall, I had an amazing time at DeptCon3 and am so grateful for all the ARCs I received. I loved meeting new friends and talking to some of my favourite authors. See you all next year, for sure!